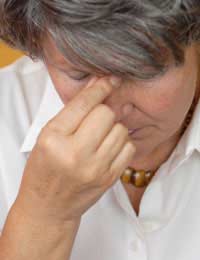 There are several times in a woman’s life when changing hormones have a substantial effect on her physical, mental and emotional state – most commonly during teenage years, during pregnancy and during the menopause. Even on a month-to-month basis, the various stages of the menstrual cycle can cause side effects such as pain, clumsiness, mood swings, headaches and even sickness, making life a bit more challenging.

For many girls and women, these times of significant but natural hormonal changes can be demanding on their overall feeling of well-being, often causing confusing or worrying physical and emotional effects. But increasingly, there are a number of resources available to help inform, educate and support women so that they understand the changes that their bodies are undergoing, and what they can do to alleviate certain symptoms.

According to research funded by the Foundation for People with Learning Disabilities however, it seems that women with learning disabilities generally have little or no understanding of the menopause, as well as the associated risks of osteoporosis.

Menopause and Women With Learning Disabilities

The publication ‘The Menopause and Women with Learning Disabilities’ was released in 2002, with the purpose of researching what women with learning disabilities understood about the menopause, the way in which they experienced it emotionally, and what support they both required and received from medical and social care professionals. The research was actually the first piece of researched based on the views of women with learning disabilities, but also took into account the attitudes of professionals such as GPs.

The research uncovered a number of aspects that are still relevant to the care of women with learning disabilities in their 40s, 50s and 60s. One such discovery was that many pre-menopausal women with learning disabilities were not aware that they would one day cease to menstruate, and the significance of this fact in regards to having children. Another group of women that had been through the menopause were also subject to this research, and although they were aware that their periods had ceased altogether, many were not necessarily aware of the impact on fertility and their ability to have children.

Interestingly, the research also revealed that a number of the women interviewed about the menopause did not have an emotional reaction to the end of their fertility. It is believed that this may have been due to the fact that many women with learning disabilities have never had the opportunity to conceive a child, as well as the lack of knowledge and understanding from peers experiencing the same life phase.

Educating Women With Learning Disabilities About the Menopause

The surveys carried out as part of the publication’s research also revealed that a large number of GPs significantly lacked in experience in treating women with learning disabilities for conditions or symptoms related to the menopause. However, despite the overall lack of information sharing and support, there was a general consensus amongst staff in learning disability services that every woman with a learning disability should have the opportunity to be educated about the menopause – and concern that this was not happening.

The Foundation for People with Learning Disabilities has since recommended that women with learning disabilities require more response to their needs from GPs and primary health care workers, especially in regards to tackling conditions such as osteoporosis. They also believe that accessible education and information about the menopause should be taken proactively, ideally from other females involved in their care.

Since the publication in 2002, a number of helpful resources have become available for women with learning disabilities, aimed at their health workers, parents and carers. These include a DVD to aid exercises and dietary changes, as well as guides to the several psychological, emotional, physical and mental changes that can occur as a result of the menopause.

Learning Disabilities and Self-Injurious Behaviour
Share Your Story, Join the Discussion or Seek Advice..
Hi I'm a support worker trying to get information about supporting severely autistic, learning disability going through menopause.
Jane - 20-Mar-19 @ 2:11 PM
I am doing some research for a project within my role in health and social care. I am 51 years old and i have recently discovered i am going through the menopause, however what i found out for myself was the symptoms started years ago. Had no idea what was involved and spent years fighting depression, anxiety severe crippling pain in most of my joints, severe headaches, weight gain etc etc i have been on anti-depressants/anxiety medication for years. I went to my GP explaining my symptoms and was tested for Fibromyalgia? when the results came back, it showed I was Vit B deficient and cholesterol was too high. All of this was exhausting and finally at my wits end I looked online for some answers and ONLY THEN realised I'm menopausal and have been through peri-menapause. My reason for sharing this is; I class myself as a reasonably intelligent person, at least able to manage my daily needs and look after myself, so how come I did not know enough to understand what was happening to me. and...why was no GP in the last five years, able to work out I may be peri-menopausal? why was I only treated for mental health and made to feel I was a bit crazy with a continued variation of symptoms. How, when i have had no real clue as to what was happening to me could a women with intellectual difficulties, be able to understand what is happening for her during this time? My project will be about finding out more and looking for resources to help to set up an easy read understanding of all the symptoms,what to expect and what help id=s out there. Any comments, information or known resources would be gratefully received Kind Regards Liz
LIZ - 13-Oct-18 @ 2:45 PM
Title:
(never shown)
Firstname:
(never shown)
Surname:
(never shown)
Email:
(never shown)
Nickname:
(shown)
Comment:
Validate: