Home > Types of Disabilities > What is Asperger's Syndrome? 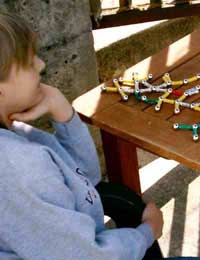 Asperger's Syndrome is one of a number of autistic spectrum disorders, a lifelong disability that affects the way in which a person interacts and communicates with the world around them. These problems with communication and interactivity can often lead to other issues, such as isolation and undeveloped social skills, which in turn can lead to emotional and behavioural problems, anxiety and confusion. However, the way Asperger's Syndrome manifests itself in the individual can vary a great deal from person to person.

The Symptoms of Asperger's Syndrome

This is perhaps due to the fact that people with this condition have far fewer problems with their verbal communication, and tend to have average or above average intelligence. They are generally able to live full and independent lives.

As people with Asperger's Syndrome tend to favour routine, children with the condition may opt for more routine activities, sometimes displaying a certain level of rigidity, and repetitiveness in their actions. This means that they may become upset or confused when certain routines are changed. They may also display almost obsessive interests in certain hobbies; many people with Asperger's Syndrome may also have an intense interest in collection particular items.

The Triad of Impairments

Asperger's Syndrome is also referred to as a 'hidden disability', in that the main impairments associated with the syndrome are not always apparent, both physically and socially. People that have this condition tend to face issues in three areas, known as the 'triad of impairments' – social interaction, social communication, and social imagination.

This means that whilst a person with Asperger's Syndrome may have specific learning disabilities, rather than a condition that leads to general learning difficulties. For instance, people with this syndrome may also have dyslexia, dyspraxia or epilepsy.

Problems with social interaction can arise as a result of difficulties with communication. This can be due to a number of factors, such as an inability to understand, perceive or predict the reactions of others, a failure to read and understand body language, confusing nuances in language and taking comments literally, as well as talking too much and appearing over-concise or precise in their language. Again, this behaviour can make the individual appear rude, insensitive and lead to feelings of frustration and isolation.

It can also mean that forming meaningful relationships can sometimes become difficult, as it is often hard for a person with Asperger's Syndrome to understand social cues and social etiquette.

Although people with Asperger's Syndrome can be extremely proficient in learning solid and logical facts and figures, as well as becoming accomplished in 'the arts', they tend to struggle with more abstract thinking associated with more philosophical topics and religious education.

They can also struggle in the areas that most people will learn through experience; that is, taking cues and guessing what others are thinking, or predicting how certain actions can lead to certain consequences. Children with Asperger's Syndrome may find it difficult to take part in games that involve imagination and creative play.

There is no particular cure or treatment for Asperger's Syndrome; however, there are steps that can be taken to help the individual cope with their perceived confusion, anxiety or misunderstanding about the world around them. It is a case of helping them to adapt to finding a way that allows them to manage everyday life, and enhance social relationships.

It is also important to educate those around the individual, as support and understanding can help the person with Asperger's Syndrome to manage and maintain relationships in a seemingly complex and confusing world. This can also help to avoid some common issues arising from the condition in adulthood, including isolation and depression.

Early diagnosis is important in helping to find ways for children to adjust to new environments, routines and relationships. The severity of the condition will affect the amount of help (if any is required at all) in the learning environment, with some children and teenagers requiring specialist help with certain learning disabilities. Social skills training and behavioural therapy may also be particularly valuable.

With a good support network who have a good understanding and awareness of the condition, many people with Asperger's Syndrome are able to live healthy, happy and independently, with many skills and talents to offer.

What is Turner Syndrome?
Share Your Story, Join the Discussion or Seek Advice..
@louey: I would definitely advise that you claim for ESA as soon as possible. If you find the form difficult to fill in, ask a citizens advice bureau for help or a local autism organisation such as the National Autistic Society. You should be entitled to ESA. I received ESA for a number of years. My claim was primarily for mental health issues, however, it has been discovered in recent years that my problems actually stem from ASD. It has been suggested that I have high functioning autism or aspergers. I have NOT received a diagnosis yet but am in receipt of ESA just on the basis of waiting for a referral. Therefore it would stand to reason that anyone with an official diagnosis is fully entitled to claim this benefit. You will be asked to submit medical evidence such as a medical certificate or a letter from your GP or psychologist or whichever professional is overseeing the treatment you are receiving (which is most likely minimal as there is a distinct lack of services for adults with ASD - which is ironic considering the emphasis being placed on children with ASD and their transition to adulthood). You will also be required to undergo a medical assessment. I have had two assessments so far and I must say that both times the interviewer was kind and understanding, however...the company who is contracted to carry out these assessments (ATOS) has been getting a pretty bad review lately. Oh, and also, it's worth knowing that the law that deals with care and support etc for those with ASD is contained in The Autism Act of 2009 or 2011 depending on which part of the UK you reside in. I hope that this has been helpful. Good luck, I hope you get it all sorted out!
Aspy Vic / Policy St - 3-Dec-14 @ 8:28 PM
@louey. You could try claiming ESA. You should also write and make a formal complaint to the Job Centre. Did they allow you an alternative time for your appointment? To find out more about what you can claim, try the Turn2Us.org.uk website.
AboutLearningDisabilities - 19-Nov-14 @ 11:41 AM
I keep getting sanctioned from my JSA although I have been diagnosed with Aspergers syndrome. The advisors at the Job centre just ignore my condition even though I have told them about it. A few months ago I was fined £150 for keeping a dental check up appointment whilst I was sanctioned. This really helped and my Grandad paid it out of his pension. Do you think I should claim ESA to stop getting sanctioned.
louey - 18-Nov-14 @ 1:23 PM
Title:
(never shown)
Firstname:
(never shown)
Surname:
(never shown)
Email:
(never shown)
Nickname:
(shown)
Comment:
Validate: