Support for Children in Mainstream Education 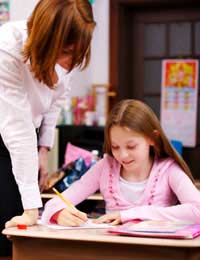 If your child has a learning disability and you wish for them to attend a mainstream state school, there are a few key points that you and the local authority will have to consider. Firstly, admission to the school will depend on whether the local authority and the school feel that your child’s attending won’t have a negative impact on other children. For example, the manifestations of some learning difficulties may include challenging behaviour that could disrupt other children’s learning.

It should also be considered whether your child will benefit from mainstream education; they may find communication with their peers difficult, and as a consequence may struggle to form positive relationships with others.

A child with learning difficulties, or special needs, may be assessed by their local authority. Individual assessments are sometimes carried out because children learn through different methods, and at different rates. No matter what the learning difficulty or disability, the child will not necessarily ‘conform’ to a set pattern of development.

State schools have a legal obligation to meet special education needs (SEN) and provide support for the children affected. In some cases, this might mean bring in extra specialist support staff. A child with learning disabilities may require a detailed assessment. This is carried out by the local authority, who may also seek specialist advice. It’s worth noting, however, that these types of special needs assessments tend to be a fairly rare occurrence.

Before such an assessment is made, a mainstream state school will first try to address any learning difficulties via a tailored action plan, known as School Action or School Action Plus. This is because most children with special needs can receive enough educational support within mainstream schools.

The earlier the special educational needs are identified or diagnosed, the earlier that the child can receive appropriate support. The local authority and school can ensure this by following or adhering to the Special Educational Needs Code of Practice. This code guides schools through the process of special needs identification, assessment, and how the school can provide the means to support the child with learning difficulties.

How To Help Your Child

If your child is already in mainstream education and you believe that they may be experiencing some learning difficulties, your first port of call would be your child’s teacher. You can also contact the school’s headteacher, or the SENCO (Special Educational Needs Co-ordinator. You will be able to discuss whether the school thinks that your child could benefit from special educational needs support, and whether there is any extra help, such as additional classes or alternative learning approaches that could be made.

This discussion may kick-start a series of aforementioned action plan steps that the school can take in order to identify and address the needs of your child. Parents of children with learning disabilities can receive additional support via parent partnership services.

Placing Children With a Learning Disability in School

Communication: Autism and Asperger's Syndrome
Share Your Story, Join the Discussion or Seek Advice..
[Add a Comment]
@ellie. Ask your local GP, school etc for therapy sessions or clubs in your area. If any of our readers are aware of any, please do post here.
AboutLearningDisabilities - 25-Mar-15 @ 2:29 PM
I have a nine year daughter with learning difficulties and live in liverpool.Sophie goes about her daily routine quite normally but when she is with other people of the same age you can really see her struggling and her coordination and spacial awareness is very poor.I would like to know if there are any clubs locally to me that Sophie could attend.in
ellie - 23-Mar-15 @ 12:10 PM
hi well where do i start,i have five year old twins,myboy,carlo,has cp,he has only use of his right arm,is unable to walk,commando crawls at home,he also has sight problems and no speech,he communicates by pointing & gestures,his learning is delayed,but to what extent,not sure with him only being 5yrs old.he started nursery at 2yrs old,along with his twin sister,through portage,they got a place at a combined nursery where he had one 2 one support,he loved nursery he is a happy child,always smiling.just b4 he was due 2 leave nursery 2 go 2 primary school,he had a statement which said a recourced school would b best 4 carlo and his needs,so i was told to go & visit as many as poss and decidewhich i thought right for carlo.the week they were due to leave nursery,they came to me telling me ue would be going to his local mainstream school,which i struggled to get my head round during summer term.3 weeks into the summer term i was sent an amended statement,stating he would now be attending a recource school,as our local mainstream did not have certain adaptations to meet carlo's needs,so 2 wweeks before new school term,i had to try and tell carlo he would no longer attending the school i had told him he was going to with his twin sister,which wasn't easy to explain to a four yr old y all of a sudden he was no longer going to where he thought.i was told the school they had changed it to was a recourcs school which he would ave to travel to & from in a taxi which was a 45minute journey each way,so with only a couple of weeks left we went to visit his new school,which i felt reassured about after meeting the head teacher and talking to her,my only concern then was the amount of travelling he would have to do,but very soon into his first term he was o.k,he settled into school really quickly and as the year went on,the changes in all aspects of his learning and development were brilliant,his firrst yr at school couldn't of worked any better,he made lots of friends and was very popular with his classmtes.then the week they were due to break up for summer term,i received a phone call from carlo's head,asking me if i was aware of carlo would not be going back to that school after summer,as she thought it might of been myself who no longer wanted carlo to attend her school,i was totally unaware of this up until this point and it was a big shock and very upsetting,when i contacted S.E.N about this,they told me that yes that was the case,he would be going to be starting at his local mainstream school in the september,as they had put a disbled toilet in this school which wasn't there the year before!!carlo has only just turned five years old and he loves the school at which at present he attends and i think it wouldn't b right to change this when he is so happy and settled where he is,at his yearly review all the professionals who work with carlo agreed he would be best to stay there as there was no significant changes in his progress.i finally received
jobiejo - 3-Oct-12 @ 1:18 AM
Most schools will very happily work with special needs children, as far as they're able. With various cutbacks that's not always going to be possible, although most special needs kids can actually benefit by being integrated into mainstream education, rather than by being segregated. There might be some negotiation required with a school before your child enters, as you'll know his or her capabilities best. That said, school should help push all that a little, too.
daphne - 2-Jul-12 @ 11:00 AM
Title:
(never shown)
Firstname:
(never shown)
Surname:
(never shown)
Email:
(never shown)
Nickname:
(shown)
Comment:
Validate: